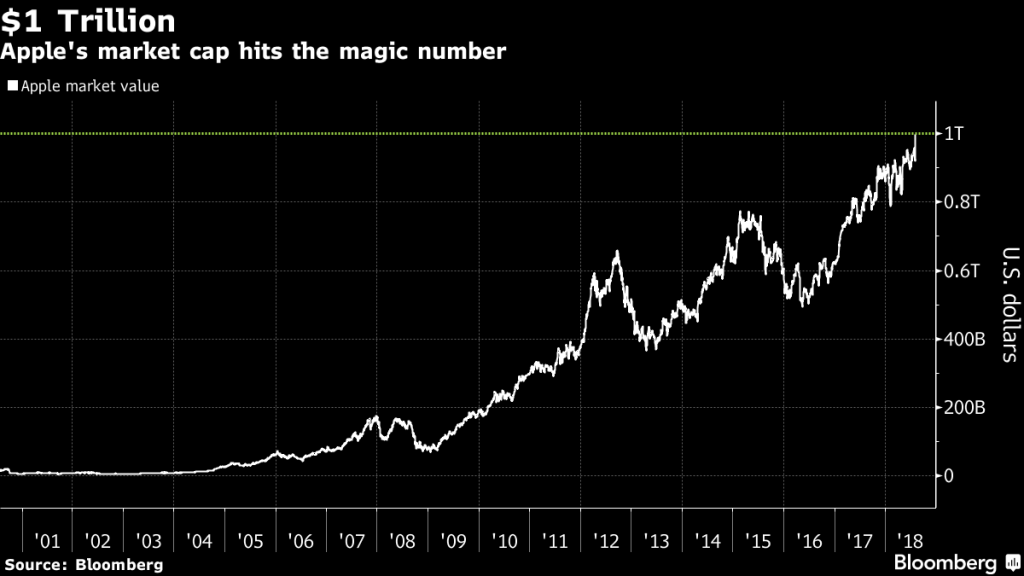 Apple Inc. became the first U.S.-based company with a market value of $1 trillion, four decades after it was co-founded by Steve Jobs in a Silicon Valley garage and later revolutionized the worlds of computing, music and mobile communications.

The consumer-technology giant briefly touched the milestone at 11.48 a.m. in New York trading Thursday, based on share count data the company disclosed in a recent regulatory filing. PetroChina Co. briefly crossed that valuation in late 2007 but slumped quickly as oil prices collapsed in the financial crisis. Other tech giants are not far behind Apple today, with Amazon.com Inc., Alphabet Inc. and Microsoft Corp. worth more than $800 billion each.

Since its inception in 1976, Apple has consistently re-imagined what a computer can be and defined how humans interact with devices and software. The iMac desktop computer, the iPod, iPhone, and iPad were smash hits, while commercial misses like the Newton and Lisa are still considered pioneering.

“Steve’s vision was grounded in the synergy between hardware products, software services, and third-party apps and media to make sure any customer would have everything they need without ever leaving the Apple ecosystem,” said Tony Fadell, who worked closely with Jobs to create the iPod digital music player.

“Layered on top of that business model, you had unparalleled product innovation, marketing excellence, combined with an untouchable retail experience,” Fadell added. “There isn’t another company out there that executes at Apple’s level of detail, at their fit-and-finish. This trinity established Steve’s vision and created the Apple we know today.”

When Jobs introduced the iPhone in early 2007, its touch screen, built-in music player, web browser and email capabilities started the smartphone revolution and left competitors like Motorola and BlackBerry in the digital dust. The iPhone surpassed almost all early expectations, selling more than 1.3 billion units. It spawned the app economy, where a global army of independent developers earn a living from their software creations while increasing the utility of the device. It’s now the hub for a growing services business that the company hopes will pull in $50 billion in revenue a year by 2021.

In the 1980s and 1990s, Apple was a very different company. Jobs left in 1985 after disagreements with then-CEO John Sculley and the board. By 1997, the company was close to bankruptcy. Jobs returned and, with key lieutenants like design head Jony Ive and operations chief Tim Cook, saved Apple and turned it into the giant it is today. Jobs cut the number of Apple products so they could all fit on a small table, bringing a knack for whittling away extraneous offerings that weren’t up to scratch.

Apple faced another crisis when Jobs died in 2011 and investors worried the company couldn’t thrive without his intense, hands-on product-design leadership. However, Cook has overseen the development of key new products, like the iPhone X and Apple Watch, new services like Apple Music, and research on potential new categories like self-driving cars and augmented-reality glasses.

Apple was worth about $350 billion when Jobs died, so Cook has led the creation of even more stock-market value than his former boss and mentor. Bloomberg News asked him about the $1 trillion target in a February interview.

“I don’t really think about it,” he said, suggesting that if the company keeps making successful products, financial success will follow. “I still view Apple as a pretty small company, the way that we operate. I know it’s not numerically, but the way we function is very much like that.”

While tapping his experience working with Jobs, and relying on the co-founder’s advice, Cook has brought his own skills and strategies to the CEO position. Jobs was a maniacal manager who focused on the smallest product components. Cook relies heavily on his suite of experienced managers.

“Tim and team have done a masterful job of continuing to develop Steve’s vision while bringing operational and environmental excellence to every part of Apple’s business to achieve their unheard-of scale while continuing to grow unprecedented margins in the consumer electronics business,” Fadell said.

Jobs was averse to debt, possibly a hangover from Apple’s near-brush with bankruptcy. After the iPhone, profit soared and a huge cash pile grew. Cook tackled that by borrowing vast quantities of money, making Apple one of the largest corporate bond issuers. He then used some of the cash on an unprecedented program of buybacks and dividends that has returned more than $275 billion to shareholders since 2012.

He also catapulted Apple into new areas of politics, tech industry policy and environmental responsibility. He has pushed suppliers to improve labor practices and battled with U.S. authorities over user-privacy tools like encryption.

“The odds are stacked firmly against any new leader taking the CEO reins from a founder,” Fadell said. “Tim has deftly proven otherwise.”

Cook’s tenure hasn’t been without its challenges. The company faced a backlash when it replaced Google Maps on the iPhone with a buggy and unreliable Apple Maps app in 2012. It also stopped work on its own car to take on Tesla Inc., and faced criticism earlier this year when it was discovered the company throttled iPhone processing speeds to avoid shutdowns from aging batteries.

Apple hit the $1 trillion milestone in the wake of a new U.S. tax law that’s been a boon for shareholders. The company’s corporate tax rate was slashed and it’s bringing hundreds of billions of overseas dollars back to the country. Much of that money will be spent on more buybacks and dividends.

Investors are also keenly awaiting a major iPhone overhaul this fall that will include the largest screen size to date and a cheaper model that includes many of the iPhone X’s features.

About 11 years after launching, the device represents both the biggest opportunity and challenge for Apple and Cook. Despite surging services revenue, iPhones generated 61 percent of the company’s sales in its last fiscal year, up from 56 percent in 2014.

If Apple is going to move far beyond $1 trillion, Cook has to find the right combination of future hit hardware products and new services that thrive on those devices.