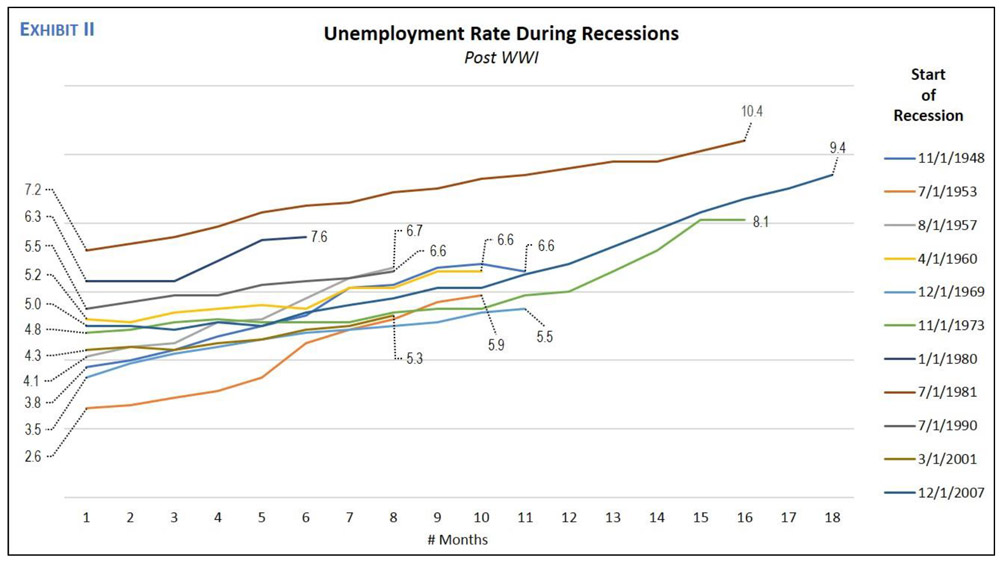 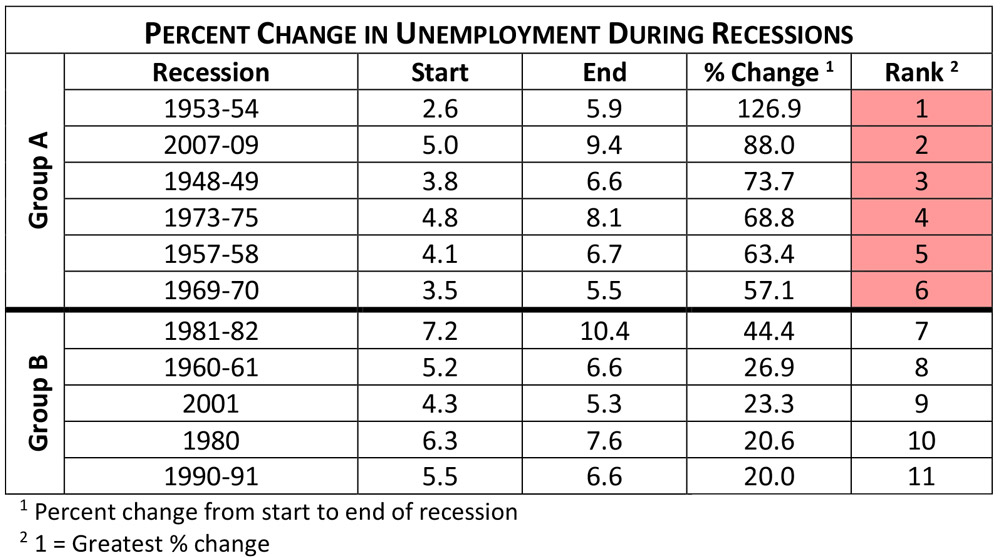 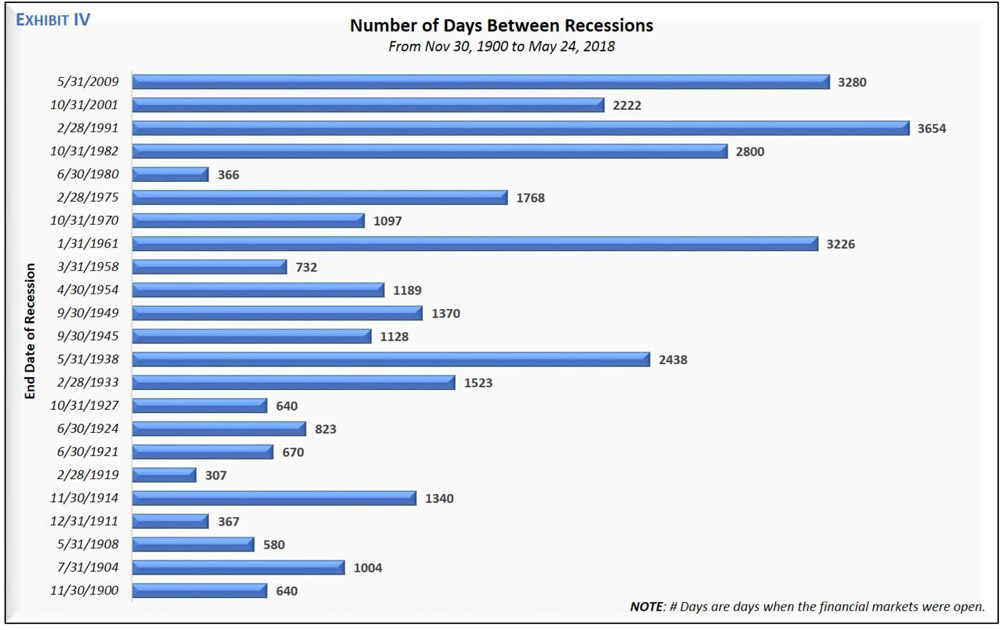 According to the National Bureau of Economic Research (NBER), the official source for dating the U.S. business cycle, there have been 23 recessions in the United States since 1900. In this, Part II of a three-part series, we will examine the duration and severity of each recession, the change in unemployment, and consider when the next recession may occur.

In Part I, we analyzed the efficacy of the yield curve as a predictor of recessions. In Part III, we will discuss the impact recessions have on stock prices and the relationship between stocks and GDP.

The following table (Table A) contains data on each recession from 1900 to the present, in chronological order. As mentioned, there have been 23 recessions since 1900, including the Great Depression. Because the start of the first recession pre-dates the period covered in our analysis, we will focus on the past 22.

There is a bold, horizontal line after the recession ending September 30, 1945 dividing the 22 recessionary periods equally. In addition to the beginning and ending dates, Table A also includes the total number of days of each recession and ranks them from 1 (longest) to 22 (shortest). The cells with the 10 longest recessions are highlighted red. Please note that GDP did not exist prior to the Great Depression, as it was created in the mid-1930s by Simon Kuznets, an economist at the NBER.

As the data reveals, on average, recessions tended to be more severe and last longer in the pre-WWII era. Additionally, 7 out of 10, and 9 of the 12 longest recessions occurred during this earlier period. Prior to the end of WWII, recessions lasted 1.5 years on average, compared to 0.9 years in the latter period. Even when you exclude the Great Depression, the average length of a recession in the earlier period was 1.3 years. Except for the Great Recession of 2008, recessions have been considerably shorter, less severe, and much less frequent since WWII. The reasons for this are varied. One reason may be technological improvements. In the computer age, the Fed can access economic data much more quickly, which in theory, should improve its ability to manage monetary policy.

U.S. unemployment figures are published monthly by the Bureau of Labor Statistics (BLS). Of course, when the economy improves, the rate falls and vice versa. While most understand the concept of the unemployment rate, we rarely hear about the different methods used by the BLS.

Table B in the gallery above provides an explanation of each method, named U-1, U-2, U-3, and so forth, and includes the unemployment rate for each from December 2017 through April 2018. A quick glance at the data reveals significant differences in these methods. Please note that U-3 is the official unemployment rate. Even so, many economists prefer U-6, citing it as a more comprehensive and true measure of unemployment. Regardless, we will refer to the official rate (U-3) unless otherwise noted.

How much did unemployment rise during these recessions? Exhibit II in the gallery above contains the answer. It shows the unemployment rate at the start and end of each recession since WWII.

Even though Exhibit II shows how unemployment changed from beginning to end, it does not convey the degree of change during the recession. For a clearer view of this, let’s refer to the graph (Exhibit III) in the gallery above.

The recession with the greatest percentage increase in unemployment was the recession of 1953. Unemployment rose from 2.6% to 5.9%, or 126.9% from beginning to end. It is interesting to note how unemployment changed very little during the recessions of 1960, 1980, 1990, and 2001. Absent the 2008 financial crisis, is the Fed is doing a better job with its mandate of full employment? Currently, the unemployment rate is historically low, at only 3.9%.

Does a low unemployment rate at the start of a recession portend a more ominous scenario? In other words, if the rate is extremely low, does this indicate a potentially steeper rise when the next recession strikes? The data is mixed. However, it is possible there is some connection. To look deeper into the issue, Table C in the gallery above ranks each post-WWII recession by the percentage rise in unemployment with 1 as the highest and 11 the lowest. A bold horizontal line has been added to divide the recessions into two groups, with Group A having the highest percent change in U-3 and Group B the lowest.

First, in Group A, the average recession lasted 12.3 months compared to 9.6 months in Group B. Additionally, the shortest and longest recessions were similar in both groups (see Min / Max). Next, there was a substantial difference in the percentage increase in unemployment in the groups. In Group A, the unemployment rate, on average, rose 79.7% from the start of the recession to its end, compared to 27.1% in Group B. Finally, the percentage change in GDP in each group was noteworthy. In Group A, the average decline in GDP was -2.8%. In Group B, the decline averaged -1.6%. Even though the best (%) were similar in both groups at -0.6% and -0.3% respectively, during the 2008 Great Recession, GDP fell -5.1%. Therefore, Group A had an average decline in GDP of -5.1%, far worse than the -2.7% in Group B.

In addition to the unemployment rate at the start of a recession, both duration and severity have an important impact on the degree of increase in unemployment. While this is not necessarily surprising, the data does provide a statistical foundation for better understanding the expansion and contraction stages of the business cycle.

Thus far – and except for the 2008 financial crisis – we have learned that recessions have been less frequent and less severe in the post WWII period. We also understand that recessions are a natural part of the business cycle and as such, are here to stay. While there are many factors that influence an economic slowdown, it is possible that the longer the expansion endures and the stronger the growth is during it, the greater the possibility of a more severe recession. The details of this are beyond the scope of this article. When will the next recession occur? To address this, we will focus on the periods between recessions, beginning with the recession that ended November 30, 1900.

Predicting the Next Recession

When will the next recession arrive? Despite the obvious importance of this question, it is impossible to predict this with accuracy and consistency. However, we can study history to gain perspective. To help with this, let’s look at the graph (Exhibit IV) in the gallery above. The Y axis shows the end of all 22 recessions in chronological order. The most recent recession ending May 31, 2009, is located at the top of the graph.

As of May 24, 2018, it has been 3,280 days, or nearly nine years since the end of the Great Recession. Therefore, the current expansion is second in length only to the period which followed the 1990-91 recession. In fact, in only 374 days, the current expansion will become the longest post-recession recovery period in the past 120 years, perhaps in the history of the U.S.

When will the next recession arrive? How long will the current expansion last? Most economists do not see any warning signs on the horizon. Regardless, we understand that the business cycle is alive and well and there will be another recession at some point. And when it comes, we can be sure that unemployment will rise, and stock prices will fall. How far will stock prices descend? Could stocks lose 20%, 30%, 40%, or more? While no one can answer this question with certainty, much will depend on how long this expansion continues, how overvalued stocks are when the next recession appears, and perhaps most importantly, how fearful investors are at that time.

Yes, there are more questions than answers, but we do know this: the past is prologue and the future uncertain. Therefore, be careful not to get too far over your skis. In other words, watch your portfolio risk carefully and stay tuned for Part III when we take an in-depth look at the impact of recessions on the stock market.