Buffett Says Berkshire's First Dibs on Deals Will Outlast Him 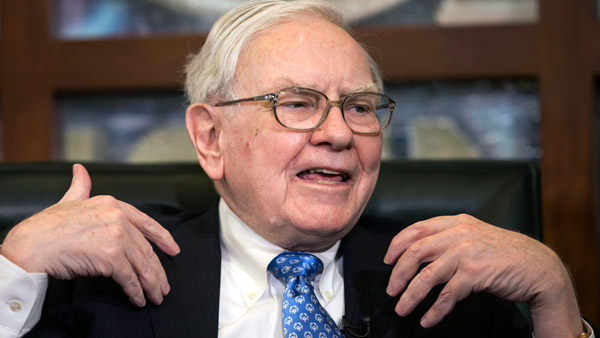 If a major company needs capital or a private firm wants to sell, Warren Buffett’s checkbook is often the one they seek out.

Will that stay the case when it’s someone else’s signature?

That was the question from several Berkshire Hathaway Inc. shareholders at the firm’s annual meeting Saturday, adding a fresh angle to the topic of succession for the 87-year-old chairman. Berkshire’s desire to utilize a cash pile that has grown to more than $100 billion makes finding large-scale deals a key issue for whoever will be the conglomerate’s next leader.

Buffett downplayed any unique skill he has to drum up deals, using his inability to find recent ones as evidence. Berkshire often makes large investments in times of panic, when its stable capital, and not the Buffett name, is the allure, he argued.

“The reputation belongs to Berkshire now,” Buffett said at the meeting in Omaha, Nebraska. “We are the first call and will continue to be the first call.”

Charlie Munger, Buffett’s 94-year-old vice chairman, said already most acquisitions are coming from the chiefs of the company’s operating subsidiaries, not he and Buffett.

“It’s happening more there than it is at headquarters,” he said.

Although Buffett named two vice chairs this year in a step toward succession, he didn’t directly address the race for his heir at the meeting.

Overall, the meeting had a similar feel to recent years. Buffett and Munger traded one-liners and fielded a few tough questions. But, by and large, the two managed to charm their fans again and keep most of them in their seats for the entire six-hour session. Here were some other topics of interest.

Investors got some detail on the performance of the two men Buffett has handed some of his stock-picking duties. The billionaire said the deputies have both “slightly” beat the S&P 500 Index since they started managing Berkshire’s money.

Todd Combs and Ted Weschler, who together oversee about $25 billion, have almost identical performance since they joined, Buffett said. Combs was hired by Berkshire in late 2010, and Weschler joined about a year later.

While Buffett said their performance roughly amounts to matching the S&P 500, they’ve received some incentive pay that they only get if they outperform that benchmark.

“It’s been better than I’ve done, so naturally I can’t criticize,” he said.

Buffett tried to temper high hopes for the healthcare venture he’s pursuing with Amazon.com Inc. and JPMorgan Chase & Co. While he said they should name a chief executive officer in the next couple months and other companies have expressed interest in joining, Buffett acknowledged the many obstacles it faces.

“We will see what happens,” he said.

Buffett and Munger were definitive in their disdain for cryptocurrencies in answer to a question at the meeting. Buffett said they will likely come to a bad ending because their value depends on someone wanting to buy them for even more money.

They draw in a lot of “charlatans” and people of “less than stellar character,” Buffett said.

Munger was even more forceful in his aversion to the assets.

“It’s just disgusting,” he said. It’s like “somebody else is trading turds and you decide ‘I can’t be left out.’”

The pair were confident that trade tensions between the world’s two largest economies wouldn’t escalate into something that derails progress. And they were bullish on the prospects for China.

Buffett suggested he should do a deal in China this year because of the luck of the number eight there — and his turning age 88 in August. American investors are missing out on opportunities in China, said Munger who has previously encouraged Buffett to invest there.

“It just looks like it’s too hard sitting in Omaha to outsmart the Chinese market,” Munger said. But it’s where people should be looking, he said.

The meeting also ignited some sparring between Berkshire leaders and Elon Musk, the head of electric carmaker Tesla Inc., over the theory of moats around businesses.

“Elon says a conventional moat is quaint, and that’s true of a puddle of water,” Munger said referring to Musk’s comments on an earnings call earlier in the week. “It’s ridiculous. Warren does not intend to build an actual moat. Even though they’re quaint.”

While Buffett said it does seem like more moats have become susceptible to invasion recently, he still observes plenty of companies, such as Berkshire’s See’s Candies unit, where they’re holding firm.

“Elon may turn things upside down in some areas, I don’t think he’d want to take us on in candy,” Buffett quipped. “There are some pretty good moats around.”

Musk fired back at his fellow billionaires on Twitter Saturday.