The “Mary Tyler Moore” actor argues to ThinkAdvisor that Republicans give the framers too much anti-tax street cred.

Even back in George Washington’s day, the one-percenters were running the show. And indeed they created the Constitution to protect their own vast financial interests. So argues actor Ed Asner — aka Lou Grant on “The Mary Tyler Moore Show” — in an interview with ThinkAdvisor to set the record straight — his version — about the Supreme Law of the Land.

Asner, winner of 7 Emmy awards, gripes plenty about misinterpretation of the Constitution’s intent in his book, “The Grouchy Historian:  An Angry Old-Time Lefty Defends Our Constitution Against Right-Wing Hypocrites and Nutjobs” (Simon and Schuster, October 2017), co-authored with Ed. Weinberger, “MTM Show” co-writer-producer, and winner of 9 Emmys and a Peabody. (Yes, Weinberger uses a period at the end of his name.)

Suitably tongue-in-cheek crabby in the interview, Asner, 88, a former two-term Screen Actors Guild president, doesn’t pretend to be a constitutional scholar, but he presents the historical facts, overlaying them with his controversial take on how the politics of the right have misconstrued the Constitution — designed for a stronger federal government — signed in 1787.

For example, while the right maintains that the framers sought to minimize taxation, Asner, a progressive Democrat, contends that taxation was actually a primary goal as a much-needed way to pay the government’s bills.

In the interview, Asner focused on the high net worth of the 55 delegates to the Constitutional Convention. He likens them to the “Forbes 100” list of today. The men were mostly lawyers; many were plantation owners, land speculators and investors in shipping and banking. Their chief goal in crafting the Constitution was to protect their wealth, Asner argues.

ThinkAdvisor recently interviewed the trade unionist and political activist, on the phone from his home in Los Angeles’ San Fernando Valley. He was scheduled to take off for Canada to perform his solo play, “A Man and His Prostate,” written by Weinberger — co-creator of sitcoms “Taxi” and “The Cosby Show” — but paused long enough to opine on how affluence influenced the Constitution, reel off jokes about Republican Jews and, not surprisingly, diss President Donald Trump. Oh, he also groused about his financial advisor.

THINKADVISOR: In writing your book, what was the most surprising thing you learned about the Constitution?

ED ASNER: That the people who crafted it were sharp businessmen who knew something about paying off debt, making money and creating stability. They were definitely the one-percenters of the time. Most of them were in it [creating the Constitution] to either make money or protect their money.

So they wrote the Constitution largely in their financial self-interest?

They were in it for the buck. It helped them protect their bucks, and it also rewarded them. George Washington received his back salary — an enormous fortune at the time — from the Revolutionary War [1775-1783], which he hadn’t immediately received.

What inspired you to write the book?

Ed. Weinberger. And then we teamed up and pooled ideas, and we pooled names: two “Eds” are better than one!

What made the framers of the Constitution — all white males — so well-to-do, other than inheriting wealth or marrying it?

Jefferson profited from his slaves. Gouverneur Morris [New York lawyer and Convention delegate from Pennsylvania] was a big speculator. Most of Washington, D.C., was created from The Potomack Company [canal-road system that increased trade] of which Washington [who helped establish it] was a big possessor.

What else were the framers invested in?

Shipping. Banking. [Most] were lawyers, and so they used the law to protect and further their wealth.

Why do you think many of those delegates died broke? [Some] got busted because they put their faith too much into the young nation and made stupid investments. I guess [some] were involved with Gouverneur Morris, who was a shady shyster and probably the richest [man] at the time. Those that got involved with him sometimes suffered [Morris bled to death trying to eject a urinary tract blockage with “a whalebone from his wife’s corset,” according to Asner’s book.].

Besides being in it to protect their assets, what else did the framers want to accomplish with the Constitution?

They were out to create a more effective government than the Articles of Confederation had created. But that meant federal taxation.

Why is the Constitution important with regard to taxing Americans?

Today, the right wing tends to think that the ideas of the Constitution were to minimize taxation and emphasize free enterprise. But the most important thing was that both James Madison and Thomas Jefferson [needed] to have a central government to tax and pay the bills. They were generally in arrears to many of the citizens who had supported the Revolution.

So the right wing has the wrong perception of the Constitution?

Of course. Just look at the tax standards at the time of President Eisenhower [tax rate of 90%] and how the right has constantly labored to reduce the rates. The best example is Donald Trump, who is nothing but a mob boss businessman.

How do Republican presidents compare with Democratic presidents with regard to taxes?

Democratic administrations have been far more fiscally minded. The [Republicans] are always getting credit for being anti-deficit and anti-tax. But the disappearance of [House Speaker] Paul Ryan [who resigned on April 4, 2018] is a very good example of how they’re full of s—.

How have Democrats been “far more fiscally minded”?

The Democrats have been more successful at balancing the budgets and holding down costs and at the same time finding the money to pay for those costs.

It seems that the federal deficit keeps climbing but the Republican Congress isn’t doing anything about it.

Does anything in the Constitution infuriate you?

My biggest bitch is that Donald Trump was 2 to 3 million votes behind Hillary Clinton — for whom I hold no grief; but in a democracy, she would have won the election. However, Trump won due to a little cluster of cells — malignant cells, I imagine — called the Electoral College. It’s stupid. But I see nobody moving to try to effectuate a change so that this kind of tragedy doesn’t happen again. It pisses me off.

Any other fault that you find with the Constitution?

The Second Amendment certainly created nothing but grief for the main body of Americans, not to mention the corpses that have been left behind.

Just curious: Are you a good investor in the stock market?

No. I suck. I never learned to be a good businessman.

Do you have a financial advisor?

Yes. I gave him discretion, but he isn’t wild. He’s no deep plunger, by any means. He’s just a shepherd to keep the wolves away. He hasn’t led me to El Dorado. He doesn’t create nirvana.

Did you make a bad investment at any point?

Not really. But I loaned money to people [who didn’t repay].

Wait, I’ve got something I want to read to you, “Yiddish Curses for Republican Jews” [by Rachel Shukert]:

“May your son be elected president, and may you have no idea what you did with his goddamn birth certificate.

“May your insurance company decide that constipation is a pre-existing condition.

“May you feast every day on chopped liver with onions, chicken soup with dumplings, baked carp with horseradish, braised meat with vegetable stew and latkes — and may every bite of it be contaminated with E.coli because the government gutted the EPA.” Want to hear more?

Well, OK. “May you live to be 120 without Social Security or Medicare.”

So what new projects are you working on?

I’m trying to finish up writing my autobiography.

That should be fascinating.

Meh. What a dull son-of-a-bitch.

Are you acting much nowadays?

I’m out of town almost every week doing my one-man show.

Wow. Travel can be exhausting.

Several catalysts could reverse the recent gains in stocks, he says.

The news comes some 10 months after TD Ameritrade and E-Trade announced their own Google integration efforts. 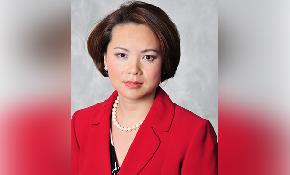 Rose Swanger of Advise Finance tells ThinkAdvisor tales of two couples: one who listened to her and did OK, and another that didn’t and paid the price.