MetLife CEO Steve Kandarian has been expanding the insurers reach outside the U.S., according to Bloomberg data.

(Bloomberg) — AIA Group Ltd. and MetLife Inc. are among companies weighing bids for National Australia Bank Ltd.’s life insurance unit, which may fetch as much as AU$1.5 billion (US$1.3 billion), people with knowledge of the matter said.

National Australia, the nation’s largest lender by assets, is working with JPMorgan Chase & Co. on the possible disposal of the insurance business run by its MLC Ltd. unit, said the people, asking not to be identified as the details are private. It hasn’t made a final decision to sell the division, they said.

Andrew Thorburn, who became National Australia’s chief executive officer on Aug. 1, is selling assets to focus on lending in Australia and New Zealand and lift returns. The bank, which has shrunk its British business and this week sold shares of its U.S. unit in an initial public offering, said Oct. 9 its full-year cash profit fell as much as 14 percent due to write-downs and charges in the U.K.

Spokesmen for National Australia, MetLife and AIA declined to comment. The lender will continue to distribute life insurance products under the MLC brand with the underwriting done by the new owner, the people said.

Shares of National Australia rose 1 percent to AU$32.85 in Sydney trading, paring this year’s decline to 5.6 percent. AIA fell 0.7 percent at the close in Hong Kong.

MetLife CEO Steve Kandarian has been expanding the insurer’s reach outside the U.S., acquiring Chilean pension provider AFP Provida SA last year for about $1.8 billion, according to data compiled by Bloomberg. In May it named Deanne Stewart as its Australia CEO.

Hong Kong-based AIA, the second-largest Asia-based insurer, has been expanding after it split from its former parent, American International Group Inc., during the global financial crisis in 2008. Two years later it sold shares in a Hong Kong IPO after it was the subject of a failed takeover bid from the U.K.’s Prudential Plc.

–With assistance from Zachary Tracer in New York, Bei Hu in Hong Kong and Komaki Ito in Tokyo.

The typical enrollee had a monthly out-of-pocket cost of $47 or lower. 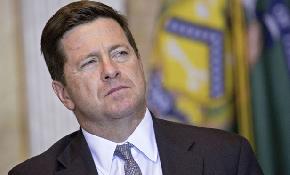 FINRA Bars Broker for Working Against His Own Firm, Clients' Interests

The rep also provided a false response to FINRA during its investigation of his actions.