By Michael Finke | December 23, 2013 at 07:00 PM | The original version of this story was published on Research Magazine
X

The first explanation is that the Internet happened. In a convincing study published in 2002, University of Illinois professor Jeff Brown and Austan Goolsbee of the University of Chicago found that the Internet had a profound impact on the market for term life insurance. The mid-1990s saw the first appearance of the now ubiquitous life insurance price comparison sites that dropped a bomb on the term insurance market. In five minutes a consumer could shop for the best price on a $500,000 term policy and save hundreds of dollars in premiums.

The average price for a term policy fell by 27% between 1992 and 1997. What happened to whole life prices during this period? Nothing. So whole life’s closest market substitute got a lot cheaper in the span of a few years. And prices fell even faster in states like California where more residents used the Internet (sorry Alabama).

They also found something else that was interesting—prices paid for term fell by 35% for buyers under 30 and only by 14% for buyers over 45. Prices paid were also lower for buyers in high-skill occupations.

Consumers who were more sophisticated and comfortable using the Internet got the best deals. If cash value policies became comparatively more expensive, we might also expect that these younger and more technologically savvy consumers would be the first to abandon them. This leads to the second explanation for the decline in cash value demand—the almost universal demonization of permanent life insurance by personal finance gurus, including Suze Orman and Dave Ramsey. Access to the Internet meant that finding these opinions was easier than ever.

Personal finance writer Pamela Yellen calls it the “Orman-Ramsey vise” that has a death grip over popular audiences who now won’t even consider a cash value policy. Orman has turned “buy term and invest the difference” into a mantra when viewers ask about buying life insurance. The Internet and the popularity of personal finance television and radio shows make it cheaper and easier than ever to gather opinions and information. Most of this information is not kind to the cash value product.

I’m sympathetic to such skepticism about cash value products for the average household. Most young households need a lot of coverage to be adequately insured against the unexpected death of a breadwinner. Cash value policies cost more when you’re young because you’re prepaying for coverage in later years. A 2012 study by the Society of Actuaries and LIMRA found that whole life policy lapse rates were highest for owners in their 20s and decreased for older households, while lapse rates rose with advanced age for term policies. Term seems to be a budget buster for older households, and cash value may be too expensive for younger buyers to fit into their limited income. Cash value policies may lead to insufficient (or no) coverage among the young families who need protection the most.

If you subscribe to the Orman-Ramsey point of view, the Internet heralded the new age of enlightenment for life insurance. Prices went down for the products that are most appropriate for the average consumer who doesn’t have an estate planning need, hasn’t run out of alternative sheltered savings options, and doesn’t own a business or have a strong desire to leave a bequest. The sharp drop in term life insurance prices and the movement away from cash value must have helped more Americans get the coverage they need for their family. Or did it? This is where things get complicated.

Barry Mulholland, a Texas Tech assistant professor and my co-author on a study of this shift, has been looking closely at what drove the drop in whole life insurance, coming up with some surprising results. First, there is some good news. The face value of all individual life insurance policies doubled during the term insurance boom from $5.4 trillion in 1990 to $11 trillion in 2011. The bad news is that the number of American households owning any life insurance fell from 177 million to 151 million during this same period. That’s over 25 million more households that are unprotected.

How did this happen? The law of demand says that when prices of term life insurance go down more people will buy it and insurance coverage should increase. But that’s not what happened. More people bought term policies, but fewer bought cash value. Rather than substitute term for cash value, many chose no insurance at all.

Most insurance veterans are not surprised. That’s because the market for any complicated financial product like insurance or mutual funds can be split into two groups—those who understand the product well and shop around for the best deal, and those who aren’t that knowledgeable and must be sold the product. Cutting term life profits to the bone through online sales was great for the more knowledgeable buyers. But decreasing profits also meant less money available to incentivize agents to sell insurance products to average families—many of whom were now wary of higher-commission products.

Michael Kitces, partner at Pinnacle Advisory Group, sees an “overall societal shift that has placed a stigma on ‘sales.’ In a world where most life insurance still needs to be ‘sold’ and the public increasingly resists ‘being sold’ it’s difficult to drive consumers to maintain proper insurance.”

Without the financial incentive, it doesn’t make sense to take the time to convince a family of the need for life insurance protection. According to Richard Hand, president of Valley Forge Wealth Management, “many folks simply do not have the cash flow to purchase permanent life insurance since they are maxed out with monthly living expenses. Many people are more inclined to buy a larger TV, newest iPhone, or other tech gadget as opposed to purchasing something they actually need. This is a function of behavioral finance, as well as educational background. In other words, the higher one’s educational level, the more likely they will understand the benefits of owning this unique asset—be it whole life or term.”

Texas Tech associate professor and former insurance agent John Gilliam agrees that the market has changed. “To make a living selling predominately term insurance you have to sell a high volume which translates [into] numerous polices and clients.” According to Kitces, “life insurance agents have tended to derive the majority of their compensation from cash value insurance and the associated compensation structure; selling term insurance is often just a supplement to income and solutions. To the extent that permanent insurance use has declined—a combination of changing estate tax system, greater availability of other tax-preferenced retirement accounts and a wider range of low-cost investment solutions—that simply puts less compensation on the table for a lot of life insurance agents, and making it up on term insurance volume is difficult.”

This means that the traditional middle market may be underserved by commission-compensated agents. “Most agents who make a “good” living have moved to selling in more sophisticated markets where the ability to pay the premiums for a conservative return (which is protected from creditors and liability judgments) is acceptable especially in the turbulent markets we have seen over the past decade,” says Gilliam.

In a multivariate analysis where we control for household characteristics like age, income, wealth and education, we find that cash value life insurance ownership actually increases by level of financial sophistication. Those in the highest 20% of financial sophistication are twice as likely to own cash value life insurance as respondents in the bottom 20%. All else equal, the most knowledgeable consumers are now the ones buying permanent policies.

Today’s buyer of permanent life insurance is wealthier and more sophisticated than in the past. Many advisors employ strategies for sophisticated, higher-earning clients to ensure that the product is used effectively. We find that owning tax sheltered savings alternatives such as IRAs and 401(k)s increases the likelihood of owning a cash value policy.

The fact that qualified accounts aren’t a substitute for cash value policies isn’t a surprise to Professor Gilliam. “It is more likely that owning cash value life insurance is a complement to other qualified plans as those with higher sophistication are looking for ways to accumulate funds on a taxed favored basis. These individuals have most likely maxed out their qualified plan contributions and are looking for a conservative way to invest money and provide for dependents while having creditor and liability judgment protection.”

Despite the downward trend, premiums to whole life policies have been increasing since the great recession. This may reflect an increase in conservatism, lower trust for other investments or even just frustration with bonds in a low yield environment. Richard Hand sees an increase in interest among his clients in the value provided by a product that blends investment and protection features. “I think one of the benefits of the great recession was that it made folks think about risk…. Post 2008, I have been selling a lot more ‘plain vanilla’ whole life insurance.”

Can a renewed taste for plain vanilla keep cash value policies from sliding down the cliff? We’ll have to wait and see.

It’s time to consider Roth conversions and harvest some losses and gains.

How Climate Change Will Alter the Muni Market

This year could be the turning point for pricing in extreme weather events. 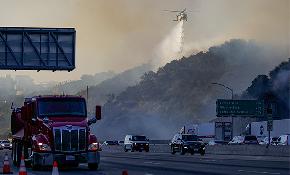 To Help Clients in Fire Zones, Advisors Rely on Mix of Tools

There's plenty of advisors can do to help clients prepare for emergencies, but there are lots of unexpected challenges as well.