What Are the Odds? 6 Election Scenarios Affecting a ‘Fiscal Cliff’ Deal

In a weekly commentary, Jeff Kleintop, chief market strategist for LPL Financial, cobbled together an insightful selection of the odds of a fiscal cliff deal based on which party wins what after the election.

In his weekly market commentary on Monday, Jeff Kleintop, Chief Market Strategist for LPL Financial, cobbled together an insightful selection of the odds of a “fiscal cliff” deal during the lame-duck session of Congress based on which party wins what after the election. The stakes are startlingly high if a deal isn’t reached by midnight on Dec. 31, as spending cuts equivalent to 3.5% of GDP and tax increases of $500 billion will begin to ravage the economy on New Year’s Day.

Kleintop said that the Fed’s QE program announced last Thursday may help ease some of pinch felt by the economy, “but if we go over the fiscal cliff it is like getting a flu shot before storming the beach at Normandy.”

He lays out six post-election scenarios and the odds of the Congress and a lame-duck president, or not, reaching a deal:

Odds of Outcome: High
Odds of Deal in Lame-Duck Session: Above 50%

Polls, including our “Wall Street” Election Poll, increasingly point to this as a high-probability outcome of the elections. Although there would be no change in control, holding the White House and the Senate during adverse economic conditions could be considered a victory for the Democrats, and to top it off, the GOP’s majority in the House likely shrinks.

A deal to mitigate the fiscal cliff would probably be reached in the lame-duck session under this scenario, but it would likely be closer to the Democrats’ terms given their election victory and primarily consist of higher tax rates.

Odds of Outcome: High
Odds of Deal in Lame-Duck Session: Above 50%

Although the battle for the Senate is looking closer than before, this is the scenario we believed was most likely all year. Congress goes from being gridlocked to unlocked as the GOP takes the Senate, but by a very slim margin, and retains control of the House. Obama wins a narrow victory in the White House, but Republicans pick up the Senate and hold the House. A deal in the lame-duck session is likely in this scenario where the Bush tax cuts get extended.

Odds of Outcome: Moderate
Odds of Deal in Lame-Duck Session: Near Zero

As a result, Republicans may not be able to pass an extension of the Bush tax cuts for several months until they first pass a budget resolution that would allow them to pass a tax bill through reconciliation, requiring only 51 votes in the Senate.

Odds of Outcome: Low
Odds of Deal in Lame-Duck Session: Below 50%, but Well Above Zero

If Romney wins the White House, it is likely the GOP would ride his coattails in the Senate, but possible that they only pick up one or two seats, leaving the Democrats in control. Under this scenario, Romney wins a narrow victory, and the Senate remains closely divided in favor of the Democrats. A deal in the lame-duck session to temporarily extend the Bush tax cuts is possible, but not probable.

Odds of Outcome: Low
Odds of Deal in Lame-Duck Session: Below 50%, but Well Above Zero

This would be a huge win scenario for Democrats, given the large majority held by the GOP in the House. In the lame duck session, House Republicans may compromise on extending the Bush tax cuts only for those who make less than $250,000, or they refuse to compromise and go down fighting. In the scenario, the top dividend rate would likely go to 43%, weighing on dividend-paying stocks, and bonds could be hurt by the potential for a downgrade to U.S. debt (the rating agency Moody’s Investor Service warned of this last week) due to the unwillingness of Democrats to cut entitlement programs, given that they would likely owe their win in the House to a backlash to the Ryan budget plan.

Odds of Outcome: Near Zero
Odds of Deal in Lame-Duck Session: Unknown

Kleintop concludes: “Therefore, there is a meaningful risk for the markets that Congress fails to create a deal in the lame-duck session and the U.S. goes over the fiscal cliff into recession. However, it is worth keeping in mind that Washington has a lot of experience in kicking the can down the road to avoid short-term pain and will likely find an eventual compromise. Instead, the real risk to the markets is what Congress may do in the lame-duck session (or early next year) on the way to the compromise.

“While the road traveled depends upon the elections’ outcome, it may be the journey—not the destination—on the way to the deal to mitigate the fiscal cliff that has the most potential to upset the markets and contribute to volatility in the coming months.  We ultimately believe a deal will be forthcoming, but only after the elections can we expect Washington to get to work.”

Ron, who is Executive Editor of ThinkAdvisor, has worked for the website since 2010, when he helped design and launch the site. Previously, he was a staff editor at The New York Times News Service for 18 years, editing TimesDigest, a daily digest of The Times distributed worldwide. He also edited The New York Times International Weekly, a syndicated news section with a global readership of over 6 million. Ron received a B.S. in Communications from University of Texas at Austin. He also attended University of London, studying Art, Architecture and Theater. 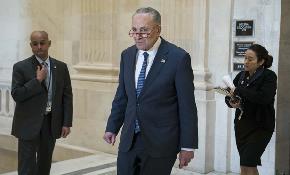 Seventy percent of respondents to an Allianz survey said they were confident their retirement portfolios would recover.