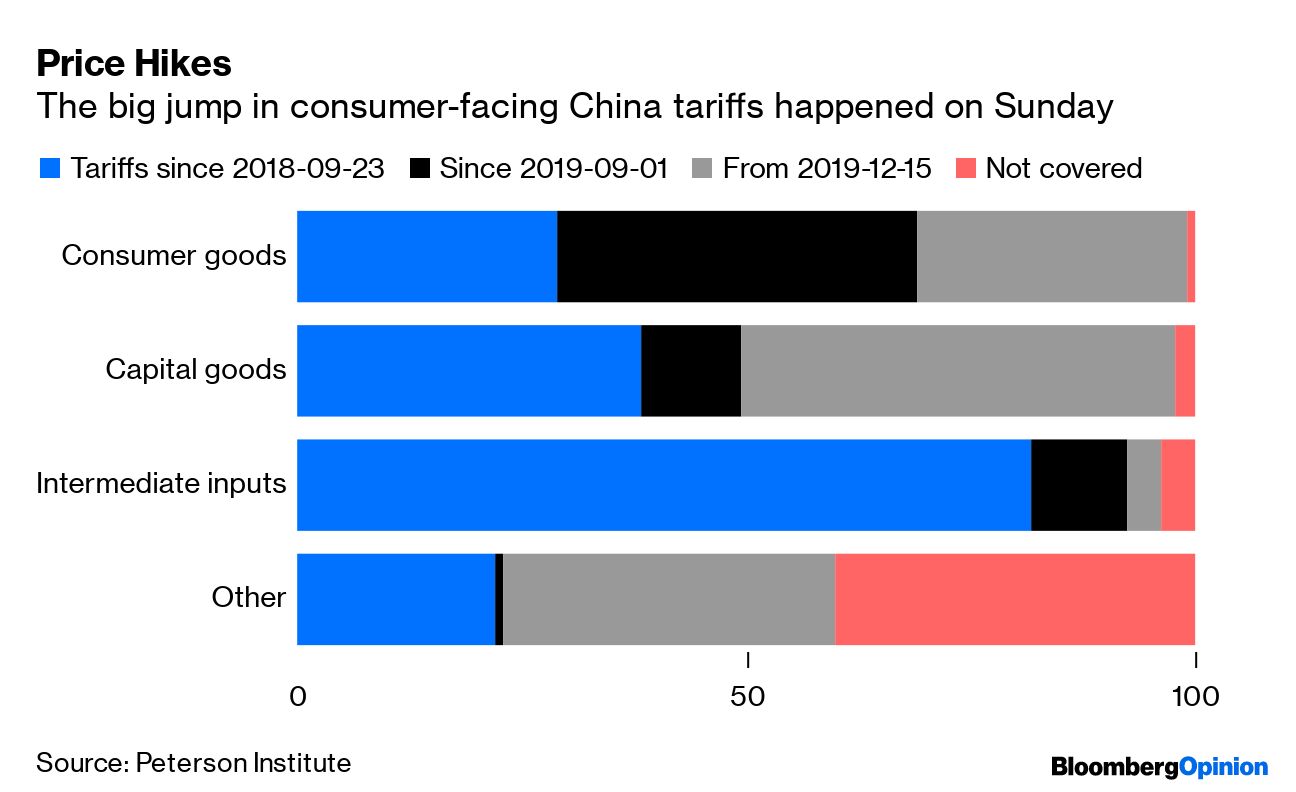 Americans better have made the most of their Labor Day discount shopping. It could be the last they see for a long time.

A 15% tariff that went into effect Sept. 1 on about $112 billion of goods imported from China will start pushing up prices of clothing, shoes and other consumer goods arriving at U.S. ports this week.

That should start taking a serious toll on shopping in the U.S. While 82% of intermediate inputs are already affected by tariffs, just 29% of consumer goods have had levies to date.

That figure will now rise to 69%, and 99% when a final tranche is imposed on Dec. 15, according to the Peterson Institute for International Economics.

The Trump administration – or at least its trade representative, Robert Lighthizer – has recognized the risk of bringing the trade war to consumers’ pockets.

The current total-war scenario, with tariffs imposed on almost the entirety of imports from China, was first threatened more than a year ago, but Lighthizer has worked hard to excise the sorts of goods purchased by price-sensitive shoppers from his product lists.

The latest escalation means that sort of strategic precision is no longer possible. Around the country, apparel retailers have already worked out where best to jack up prices, while toy shops and sporting-goods stores will be doing the same ahead of the post-Thanksgiving tranche.

One unexpected ally for the Trump administration is the retail industry itself. This is a business that invented the term “sticker shock,” after all, so trying to hide the costs of Trump’s policies from consumers isn’t exactly unfamiliar terrain.

“We have lots of tools in place to monitor elasticity and what the competitive environment is,” Kohl’s Corp. Chief Executive Officer Michelle Gass told analysts Aug. 21. “So we’ll make very sound and surgical decisions.”

There’s already a model for how this is likely to play out. One of the first rounds of tariffs imposed by the Trump administration applied a 25% levy on washing machines, but an April study by economists at the Federal Reserve and University of Chicago found that retailers instead decided to spread the pain around.

Prices for washing machines jumped about 12% more than those of comparable goods after the levies were imposed – which might have suggested that stores and suppliers were taking some of the pain rather than passing the full 25% cost onto consumers.

There was a telling exception, though: The price of dryers rose by about the same magnitude, despite the fact that they weren’t affected by the tariffs. In other words, retailers were splitting the extra cost between two similar products in an attempt to minimize the apparent rise in prices.

As a result, shoppers are unlikely to see markup racks with “Prices raised on account of trade war” tags on them.

'We Have Met the Enemy, and He Is Us'

Gary Shilling: 6 Signs the Economy Is Weaker Than Investors Think

Half of Advisors Look for Market Downturn Next Year: SEI

Instead, watch out for harder-to-pin-down increases in categories where individual chains have pricing power, as well as weakening of gross margins, cost-sharing with Chinese vendors, and efforts to shift parts of the supply chain to other source countries.

Returns on equity for consumer and durable goods companies in the S&P 500 index are already at recessionary levels, despite the general buoyancy of stocks in 2019; you’d be bold to bet that was set to improve over the balance of the year. 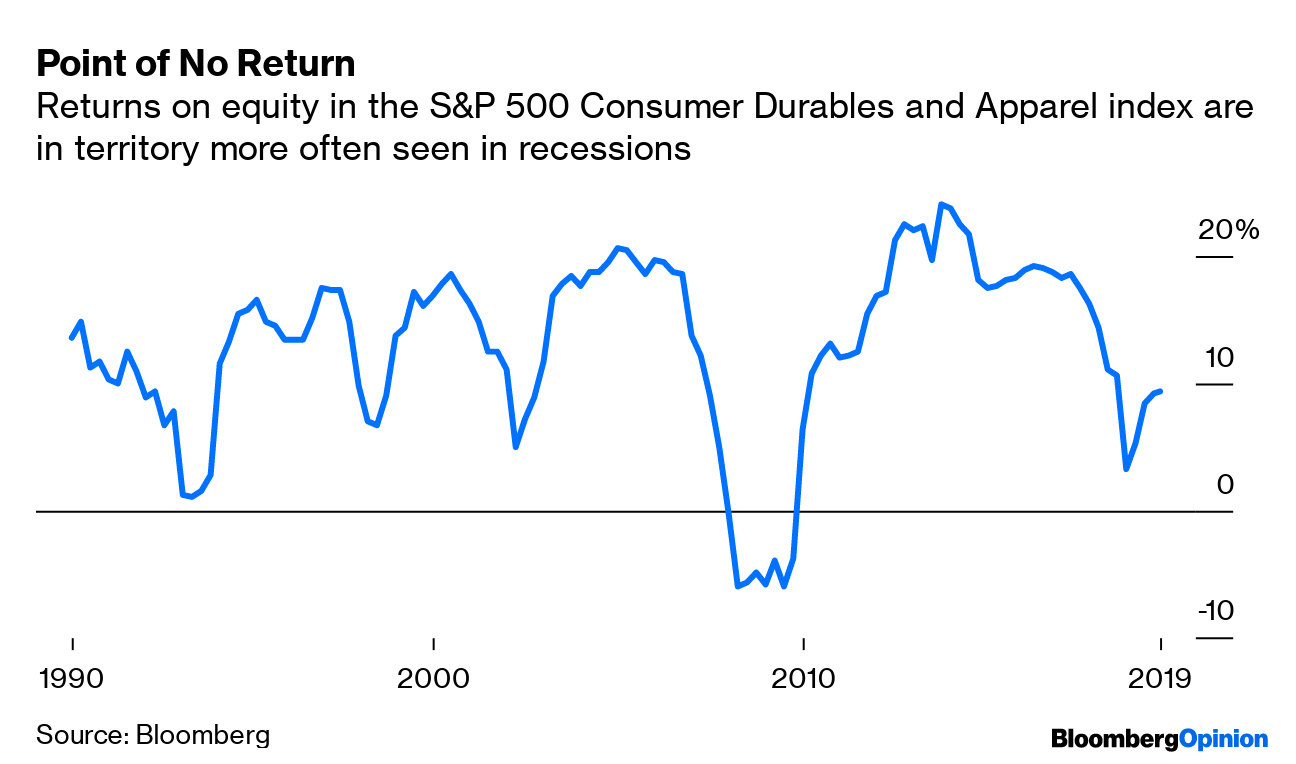 Consumer sentiment is tracking down from its recent rosy levels in any case. Expectations for the economy suffered their sharpest monthly fall since 2012 in the University of Michigan’s latest survey.

Views of current conditions fell to their lowest level since President Donald Trump was elected, and Republicans posted their most pessimistic consumer sentiment since Trump’s inauguration. (There’s a strong partisan split in consumer sentiment, with views jumping sharply depending on whether or not a consumer’s favored party is in the White House.)

The strong U.S. economy over the past two years gave President Trump latitude to prosecute his trade battle with China – but as it starts to weaken, that may test his resolve. Given the relief in financial markets in recent days at signs of a detente, he might want to consider the benefits of a more lasting peace.

Half of Advisors Look for Market Downturn Next Year: SEI